UPDATE - July 2020: As of last summer (June 2019), I have switched to VS Code as a Python IDE and never looked back. The reason being that it feels a little bit more lightweight than PyCharm, but still has all the functionality one would need to write Python code and can be more easily configured to act like RStudio. Check out my more recent post Setting up VS Code for Python Development like RStudio for my settings.json (user settings) and keybindings.json (shortcuts) configuration files that you can download and paste into your own VS Code installation to get up and running quickly.

Yes, this is a post about IDEs. I don’t intend to insult or incite any ill-will towards any person or project. The purpose of this post is to give other people who are familiar working with R, some insight into how a fellow R user has evaluated and experienced picking an IDE for programming Python. My criteria was to have an interactive experience, like RStudio, with support for debugging, version control, and code completion. That’s not too much to ask for, right?!

If you have been interested in data science, and R and Python programming, then you’ve probably seen IPython or the newer Jupyter Notebooks. You might have also seen something similar with Kaggle Kernels or Zeppelin Notebooks. I agree that the notebook format is great for explaining and teaching, which is why so many tutorials display their work in notebook format. The problem with Jupyter notebooks is that the format is plain-text, but not easily readable when checking code diffs on a version control system like GitHub. For example, a simple code change can make massive diffs:

Second, notebooks force you to work in chunks. Chunks are nice for helping you separate and structure your workflow, but you can’t run half a chunk. It’s an all-or-nothing game. The problems occur when you need to debug something in the middle of a chunk. At that point you need to deconstruct the chunk, then test it, then put it back together. It’s a mess. Finally, when you move your code into production it likely won’t be in a notebook format. Why write code in a notebook when you know it will probably be rewritten again in another format? This is inviting silly errors and wasted time.

If you’ve used any other tools created by YHat or just want the RStudio exprience with Python, then you might be tempted to use Rodeo. Rodeo does a fantastic job at replicating the look and feel of RStudio, but if you take a closer look it is missing a lot of features you use in RStudio, which is frustrating. You can tell even from screenshots that it’s seriously lagging RStudio in features. 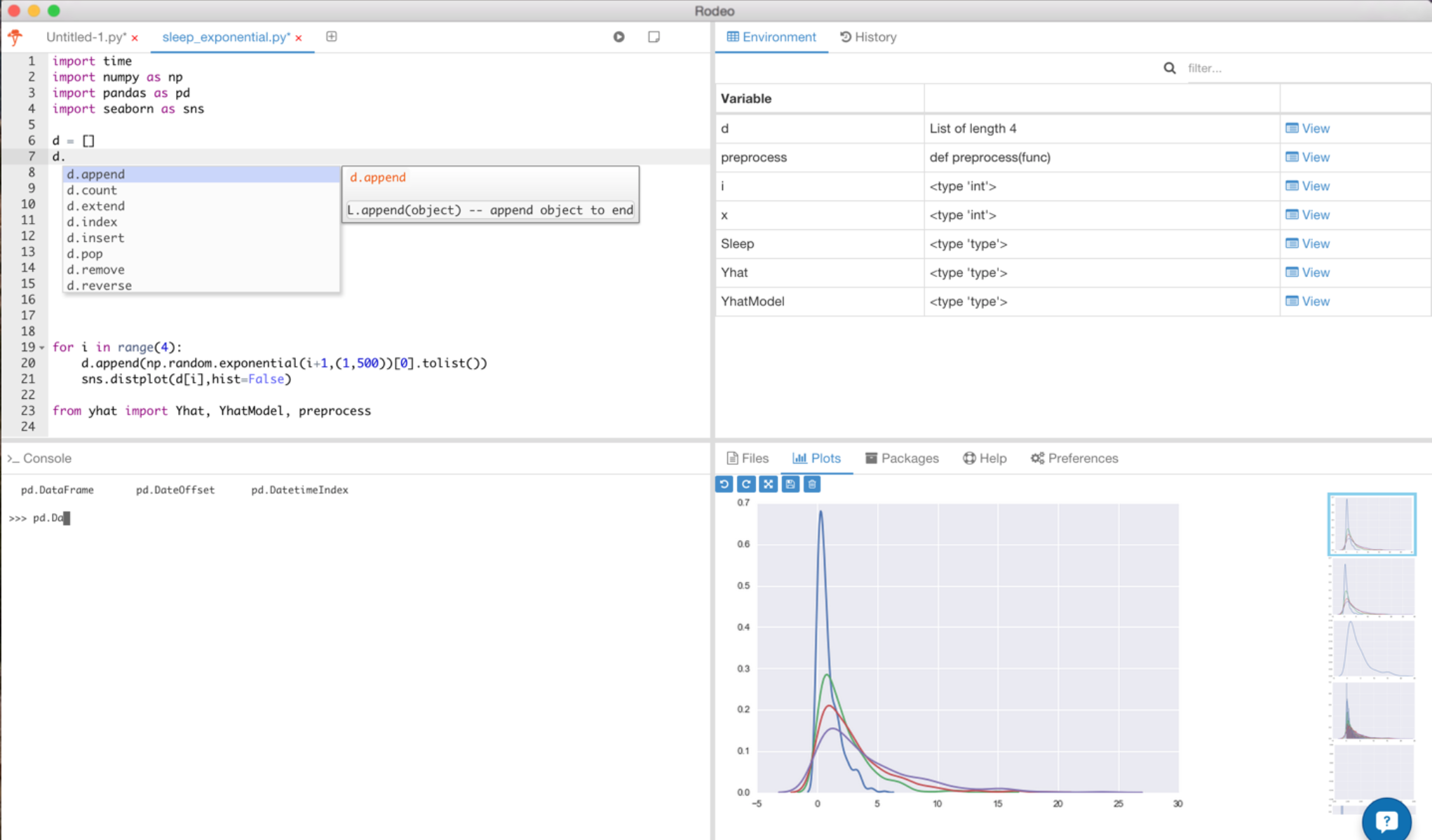 Rodeo is open-source, but development is mainly driven by the folks at YHat, so support and longevitiy is a concern. Finally, it does not have native integration with Git, which is a deal-breaker. If you can’t version control your code easily, then you’re more likely to make mistakes.

I can’t comment much on my experience with Spyder. I had an issue with converting a notebook to a script, which was a feature I hoped would work effortlessly. Also, it doesn’t support Git, which as mentioned with Rodeo, is an immediate deal-breaker. Spyder seems good for a specific data science niche, but it’s not quite there, and with so many other full-fledged, battle-tested Python IDEs, why not expand your horizons to have an IDE that will allow you to utilize the entire spectrum of general purpose programming that Python is?

If you ask a hardcore programmer about picking an IDE, they might tell you that you don’t need one at all. It’s true that you can effectively and efficiently write Python code from a text editor; however, I wouldn’t recommend an R user take this approach. First, you’ll probably be frustrated with the lack of transparency for defined variables, folder structure, etc. that RStudio neatly provides in its “Environment” and “Files” panes. Second, if you’re just starting to learn Python after learning R, you’ll want some more guardrails to prevent against syntax errors, code completion, formatting, etc. This isn’t to say that text editors don’t provide it, because they do, but you’ll spend time configuring these features inside of getting them out of the box from an IDE.

PyCharm definitely has the feel of a heavier IDE. There are a lot of settings and features that would be intimidating at first, but it’s got everything right there. A console, version control support, debugging, code completion and more. The one thing I did change was the keyboard shortcuts to executing code interactively especially when highlighting code sections to get that same feeling as you get in RStudio where you can select pretty much anything and get it to run down in the console interactively. After tweaking the keyboard shortcuts, it was pretty much the same flow as using RStudio and I felt good about using a full-featured and well supported project. Ultimately, PyCharm is what I’m sticking with to continue writing Python code.

I have read quite a bit online about the IDEs mentioned above, but other peoples’ opinions didn’t do much for me. I literally downloaded each IDE and spent a couple hours trying to work on a project. If it was easy to get going I kept trying more things until I was able to test out my desired features. You can take my word for going with PyCharm to continue your Pythonic data science, but I’d recommend to anyone to try things out, see what you like, and go with it. In the end, you should be spending the majority of your efforts writing code, not fiddling with the IDE, so make the choice that makes you most happy and productive.