The latest version of the {salesforcer} package (v0.2.2) is now available on CRAN and is ready to help you have better access to data in your Salesforce Org. Along with a host of bug fixes this release has three big features:

For a complete list of updates, please review the release notes from v0.2.0 onwards listed on the {salesforcer} pkgdown site here: https://stevenmmortimer.github.io/salesforcer/news/index.html.

Salesforce has rich support for Reports in your Salesforce Org. Sometimes reports are a better way to collaborate with other users because they can create reports in the GUI or you can create one for them so they always have access to the most current recordset meeting your report criteria. The challenge comes when trying to access this data programmatically. Fortunately, Salesforce provides the Reports and Dashboards REST API as a means to not only execute Reports, but to also manage them in your Org.

In Salesforce there is a dedicated page to displaying the list of reports in your Org. It typically follows the pattern: https://na1.salesforce.com/00O/o (replace na1 with your server instance). When you click on a report in the GUI you should see the report’s results. Below is a screenshot of how a report may look in your Org (note the report Id in the URL bar): 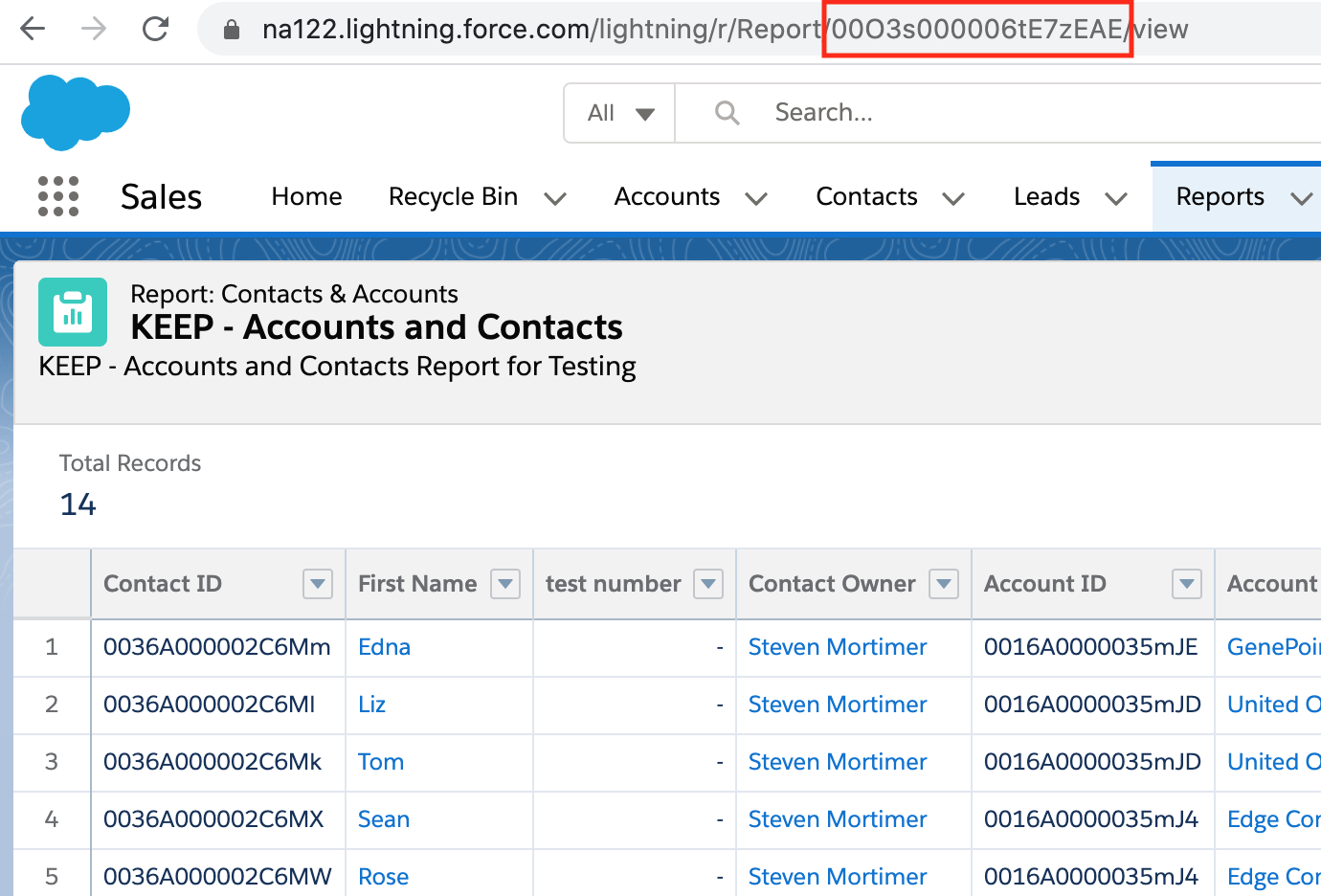 The report Id above ("00O3s000006tE7zEAE") is the only information needed to pull those same results from an R session, like so:

Currently, all of the report related functionality in the Reports and Dashboards REST API has been ported into the {salesforcer} package and you can do some pretty neat stuff like on-the-fly filtering and sorting:

For more detail on how to take advantage of this new functionality please see the pkgdown website https://stevenmmortimer.github.io/salesforcer and, more specifically, the Working with Reports vignette which provides a soft introduction to these concepts. Finally, keep an eye out as more dashboard and analytics notifications functionality is also added.

In Salesforce version 47.0 (Winter ’20) query functionality added to the Bulk 2.0 API. In the overview of this feature Salesforce emphasizes the consistency with the REST APIs and the ease of use (e.g. “Automatic File Batching”), but does not mention any claims in terms of speed compared to the Bulk 1.0 query functionality. In {salesforcer 0.2.2} the default API when using sf_run_bulk_query() or sf_query_bulk() is now the Bulk 2.0 API, assuming it is better than the Bulk 1.0 API. However, You can easily switch between the APIs just as you did before in previous {salesforcer} releases by specifying it in the api_type argument. Please note that, because of additional standardization on the column ordering and arguments to guess types, the queries below will all return the same exact format of results. For example we prioritize the following fields in queries alphabetically within this prioritization waterfall:

In short, Bulk 2.0 now has query functionality and it is consistent with the other API’s query functionality. I recommend checking to see for yourself which API works well. Below is a simple example comparing a single run of the REST, Bulk 1.0, and Bulk 2.0 APIs. Consider using the {microbenchmark} package to run more precise performance tests.

One upgrade for {salesforcer 0.2.2} is better support for relationship queries, both child-to-parent lookups using the dot notation and parent-to-child nested queries. In prior releases the results were not parsed consistently and presented themselves in a variety of hard to debug issues on GitHub that were brought up in #19, #35, #38, and #54. This release finally aims to address some of those bugs through more consistent parsing methods for both the XML returned by the SOAP API and the JSON returned by the REST API. However, I would strongly recommend testing in your Org with your own queries to see the impact before deploying to a production environment. If any unexpected behavior crops up, then please file an issue on GitHub using the query issue template so we can get it resolved.

A new vignette has been included with this release that covers the types of queries currently supported by the package and is available here: Supported Queries. I highly recommend reviewing for guidance and inspiration on how to what types of queries are possible running against your Org.

For a complete listing of all changes made in recent releases of {salesforcer} please view the Changelog (aka NEWS.md) file. Bug reports and feature requests are welcome on GitHub in the repository issues section.

Thank you for your continued support!